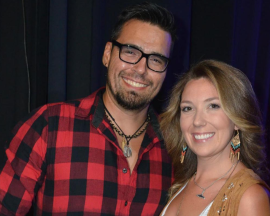 Chelsey June has been capturing the hearts of audiences with her soulful voice and unique song writing skills. Chelsey grew up in Ottawa and Gatineau with her mother who was from Maniwaki she spent her childhood surrounded by music, it was this early introduction to a wide variety of songs that helped shape her unique sound and style.

Her teenage years were a struggle that’s when she began to write poetry. In her 20’s Chelsey decided to try song writing. Songs came very naturally and writing them became an instant passion. Chelsey grew up with little information regarding her Aboriginal heritage she was just told that she was Aboriginal. Her culture was unfortunately something that was lost in her family due to the fear and the stigma associated with being Aboriginal in a small French village.

In her adult years Chelsey met with many Aboriginal elders and embarked on her personal journey of learning about her roots. Not only has she reconnected with her culture but she has also been able to share it with her family. Chelsey was able to connect with the traditional teachings and stories and for the first time in her life she finally felt like she was “home”. She refers to these feelings as blood memories thoughts and feelings that she has always carried. “Although I did not get the opportunity to grow up with my culture I always felt like it was a part of me it is my wish to share that now with my children and through music so that it is never lost again.” Chelsey makes a point to be an advocate for all people who find it hard to find their place. I am proud to be a Métis woman and humbled that I get to have a voice in this great big world.

Chelsey was chosen as a new and upcoming artist by La Ville de Gatineau. She has been featured on CTV Morning show, TVA, Radio Canada, Unique 94.5 FM. 93.1 FM CKCU and has headlined at Cabaret la Basoche and Shenkman Arts Centre. Chelsey was also selected to appear on the Aboriginal Peoples Television Network (APTN) for the TV series TAM (Talents Autochtones Musicaux) which will be airing September 2015. She released her first album “Seize the day” in 2013 and her EP “Finding me” which was nominated best Folk album at the the 2015 Indigenous music awards.You can check out her Chelsey June website www.chelseyjune.com

Jaaji (pronounced- Yaah Ye) is an Inuit name derived from the english name George.  Jaaji grew up in  a humble little community called Quaqtaq in Northern Nunavik where he was raised by his Grandparents in the Traditional ways of the Inuit where a lot of his influence in his writing depict of the life on the land.  Jaaji also spent his summers as a child with his biological father in Kahnawake, a reserve of the traditionally Iroquoian-speaking Mohawk nation on the south shore of the St. Lawrence River in Quebec, Canada, across from Montreal.

Despite his Dad’s attempt to teach him how to play at the age of 7, Jaaji only wanted to play outside at the time so he learned how to play guitar late but started to write right away but hung up his guitar for about 15 years up until the beginning of 2014.  Now, Jaaji has become a house hold name in Inuit based Music.  He is working hard to ensure that his voice and musical storytelling is heard around the arctic and the world.

Jaaji was busy in his debut year on the music scene by going to 12 festivals including a TV appearance at TAM (Talente Autochtone Musicaux) which showcases Aboriginal Music.  His album Nunaga won Best Indigenous Language album at the 2015 Indigenous Music Awards!  He has been featured on CBC North CBC Montreal , Radio Canada, K103.9 fm, just to name a few.  Aside from playing in a band, Jaaji taught Inuttitut song writing at the Nunavut Sivuniksavut College in Ottawa in 2015 and is also studying to be a sound engineer at the Technical Audio Recording Academy (graduating April 2016).  Jaaji is also a public figure and does seminars and workshops with his partner and Bandmate Chelsey June talking about Social Awareness, Alternative Measures to healthy living.

Jaaji released his self-produced CD titled “Nunaga”.  Over 5000 copies were made and sold to the demanding public. There is still a demand for the Album which was won Best Indigenous Album at the 2015 Indigenous music awards. website: www.jaaji.net

All session by Twin Flames – PAST EVENT

Chelsey June has been capturing the hearts of audiences with her soulful voice and unique song writing skills. Chelsey grew up in Ottawa and Gatineau with her mother who was from Maniwaki