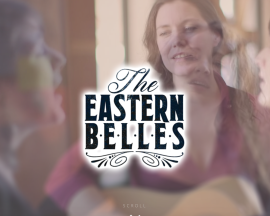 The Eastern Belles are PEI’s own Catherine MacLellan, Ashley Condon and Meaghan Blanchard. “The Island” (as it is affectionately known) is where these three award-winning songwriters have chosen to live and create while pursuing their musical careers and is where the idea was first formed to tour together as “The Eastern Belles”. They are three distinctly stunning voices that, alone, stand powerfully and then come together in some of the sweetest harmonies you have ever heard. Sharing a love for old country, folk and Americana music, this collaboration was a natural fit.

All three have toured extensively as individual solo acts, developing a hefty following and have contributed to putting little PEI on the big musical map. When The Eastern Belles come together to sing and write songs, there’s a magic that cannot be denied. Some might call it a super group, but these down home gals call it fun and an exciting way to get MORE music to wider audiences.

When you come to an Eastern Belles performance, you will be treated to both solo and trio performances interwoven with stories and playful banter. Growing up on an Island of 134,000 people begets a fishing boat load of tales to tell.  It is roots music at its best delivered in an intimate setting by three of the finest singer-songwriters that Eastern Canada has to offer.

Currently residing in Breadalbane PE, Catherine MacLellan has been a perennial fixture at the top of Canada’s Roots Music charts since releasing her first album in 2004, winning acclaim from international media as well including The Austin Chronicle, The Boston Globe, BBC Radio, Maverick Magazine and Q Magazine. She has also been nominated for two JUNOs in 2015 for The Raven’s Sun, “Roots Album Of The Year” and “Songwriter of the Year” taking home the prize for the former.

With two CFMA nods and six PEI Music Award nominations under her belt, Montague, PEI’s Ashley Condon has been winning audiences over with her larger-than-life stage presence and down-to-earth charm. Her sophomore album This Great Compromise (2013) was produced by Condon’s songwriting hero and three-time JUNO winner David Francey and showcases her uncommon song-writing skill, marked by a rare and hard-won level of maturity and emotional nuance. She is celebrated for her ability to make audiences feel as though they are sitting cozy in her PEI living room.  Condon will be touring the UK in fall 2015 and is currently working on her third studio album with an anticipated release for winter 2016.

Meaghan Blanchard is a singer/songwriter from Hunter River PEI. She draws a lot of her inspiration for performing and songwriting from her grandparents and the memories of the Saturday night dances at the community hall where she got to hear them play.  Her latest album “She’s Gonna Fly” brought Meaghan her second ECMA in April 2014 along with two Music PEI awards.  Her previous album “Chasin’ Lonely Again” was also an ECMA award winner in 2011.  Her first album “Changing Things” picked up four Music PEI awards in 2009 including Folk Album of the Year and received two ECMA nominations.

Sponsored by luvly in lunenburg.

All session by The Eastern Belles – PAST EVENT

The Eastern Belles are PEI’s own Catherine MacLellan, Ashley Condon and Meaghan Blanchard. “The Island” (as it is affectionately known) is where these three award-winning songwriters have chosen to live and create while pursuing