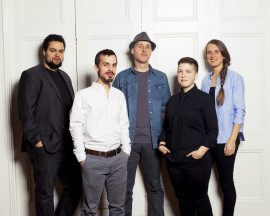 Paul Aarntzen, one of Hillsburn’s three singers and the songwriting force behind the group, remembers clearly the first time they got together in the spring of 2014: “We crammed four people and six or eight instruments into my two-door hatchback, drove down to Hillsburn —the village on the Bay of Fundy where I used to live — and spent three straight days playing together.”  After two or three such sessions, Aarntzen sold his house and moved to Halifax to work on the band full time.

Hillsburn released a self-titled, self-produced EP in October 2014. “At that point, we’d only been rehearsing seriously for a month, but we were excited to share what we’d been working on,” recalls Rosanna Burrill, another of Hillsburn’s singers and its de facto front person. “We rented a hundred bucks’ worth of gear and recorded the EP in one weekend.”

“We have a method of choosing songs and of putting arrangements together that’s emerged naturally over a year or so of playing together,” explains Jackson Fairfax-Perry, Hillsburn’s jack-of-all-trades keyboardist, saxophonist, and mandolin player. “I think there’s a feeling of settledness about our sound that comes out of that.”

The quartet also credits producer Jon Landry with helping to pull the project together.  “We were a bit nervous about inviting a fifth voice into the process,” concedes Clayton Burrill, the third of Hillsburn’s singers and Rosanna’s older brother. “We all tend to have strong opinions and we weren’t sure if having another person involved would make it more difficult to get everyone on the same page.”

Sponsored by The Grand Banker.

All session by Hillsburn – PAST EVENT

Paul Aarntzen, one of Hillsburn’s three singers and the songwriting force behind the group, remembers clearly the first time they got together in the spring of 2014: “We crammed four people