Lunenburgers reminisce about days spent at the Capitol Theatre

Lunenburgers reminisce about days spent at the Capitol Theatre 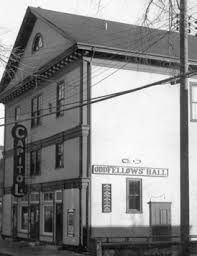 When asked about memories of the Lunenburg Opera House, Lunenburgers are taken back to a time when the building was better known as the Capitol Theatre.

It was a place where ten cents could buy you a spot in a red vinyl seat that was perfectly worn. As the curtains would roll outward and reveal a state-of-the-art cinemascope screen, the matinee would officially begin.

Saturdays were spent at the Capitol Theatre.

“We would line up on Saturday afternoons to see the cinema – and yes, there were lines of people getting tickets,” said Rosalie Osmond.

From the 1930s to the 1970s, the Capitol Theatre was the place to go to watch the latest motion pictures.

“As children, it didn’t matter what was playing at the theatre. We went every single Saturday to the matinee,” said Deanna J. Zinck. She recalls going to see Love Story five times at the Capitol Theatre.

Some locals also remember Sam Herman, the manager of the Capitol Theatre from the 1930s to 1956, who was always the voice of authority.

David M Afford laughed as he recalled an instance with Herman.

“They had a movie with the marine corps. They started playing the marine corps theme and the kids all started to stomp their feet in time with the music,” said Afford. “He turned the projector off, turned the house lights on and came down with his cane, pounded it on the floor, and called everyone a bunch of hoodlums.”

Herman was one of the oldest theatre managers in Canada until the Capitol Theatre was taken over by Arthur Corkum, who ran the theatre until its closure in 1976.

I miss the old theatre. I really enjoyed going there,” said Sherry Oxner. “It was what we did on Saturday afternoons. That was our thing.”

While Lunenburgers reflect on their past at the Capitol Theatre, they look forward to new experiences at the Lunenburg Opera House.

“Well, it’s changed inside a bit, but it’s nice to be able to go back,” said Afford. “It’s nice to have a theatre to go to. In fact, I think Lunenburg could stand a full-fledged theatre because there is a lot going on in the town normally and there is a lot of history.”

The Lunenburg Opera House building has undergone extensive renovations since its time as the Capitol Theatre and will continue restoration as it enters a new era operating as an Arts and Entertainment venue.

“I think anything that preserves old buildings and keeps them going is fabulous,” said Osmond. “Any kind of entertainment venue, just keeping the building up is something.”

The Lunenburg Opera House has been owned and operated by the Lunenburg Folk Harbour Society since 2019.

Lunenburg Folk Harbour Society is a non-profit, volunteer-based organization. They are focused on preserving and celebrating the tradition of folk music through educational programs, youth scholarships and showcasing world-class musicians from across Canada, United States and beyond.